TDOA stands for Time Difference Of Arrival and is a method to geolocate RF transmissions. For a two-dimensional geolocation, three or more RFeye receivers, connected to omnidirectional antennas, are placed in a spatially separated network. The different receiver sites measure the difference in signal arrival times. Each pair of receivers (e.g. A&C, B&C in the picture) outputs a probable geolocation along a hyperbolic curve. Where these curves intersect is the highest probable site of the transmission. The TDOA example above will give the longitude and latitude of a transmission but no indication of the third dimension i.e. altitude. To extend TDOA geometry into three dimensions, we will need a fourth receiver and create a third hyperbolic curve to define height. The point where all three cross, will give us our location and altitude.

As a proof of concept exercise, a network of 4 RFeye receiver Nodes was set up to geolocate aircraft in the area surrounding Buffalo, New York. The system was set up to monitor unencrypted ADS-B transmissions from commercial aircraft. The nature of ADS-B transmissions makes them an ideal testbed for establishing the practical performance of a 3D TDOA system, as it is possible to compare its geolocation results with the GPS position of planes broadcast through ADS-B.

The RFeye Nodes were arranged with a 70km baseline, to survey an area around 900km across. Over a 48-hour period the system monitored the 1090 MHz aircraft ADS-B transponder frequency and 3D geolocated the signals. To determine accuracy, the ADS-B transmissions where decoded to provide true GPS location and altitude and then compared with the 3D TDOA result. 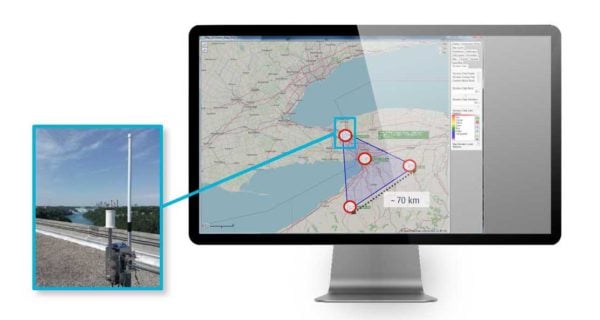 Each green point in Fig 4 represents an error of less than 500m, yellow points errors of <5km and red points errors of <10km. The black squares within each of those regions show what that level of uncertainty will mean in practice. Accuracy increases as planes approach the network, and within the network itself median errors where less than 200m.

The system was able to accurately geolocate and track aircraft with speeds of up to 580 knots over hundreds of km of operational airspace (in third party testing, tracking aircraft at supersonic speeds has been shown to be possible).

The video below is a 3D render of a small data subset captured over the course of 2 days tracking aircraft over Buffalo, New York.

Speak to our application specialist

3D geolocation and tracking of aircraft and UAS